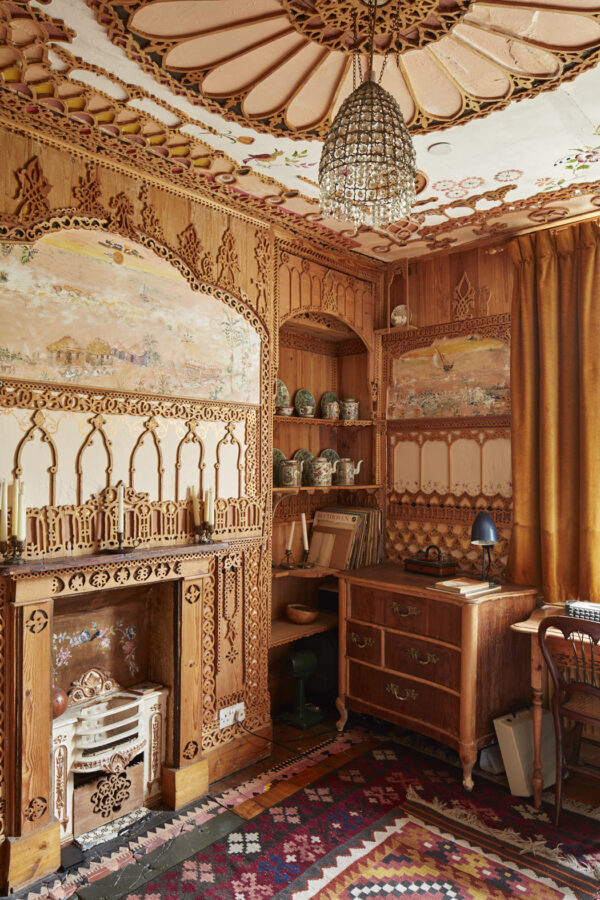 Corner view of study at 575 Wandsworth Road, including wall painting of a scene of Zanzibar. Credit Robin Forster 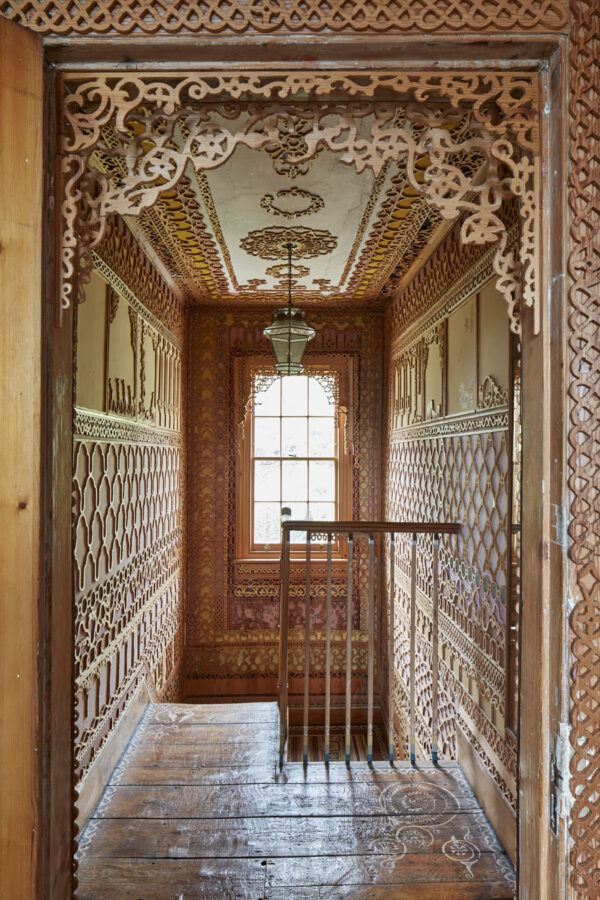 View from the landing at 575 Wandsworth Road, detailing the depth of layers in the fretwork carving. Credit Robin Forster 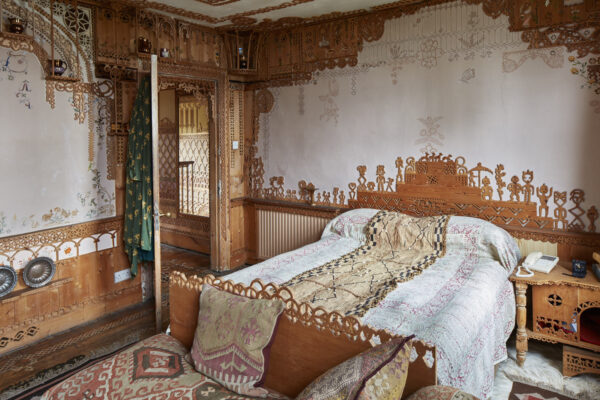 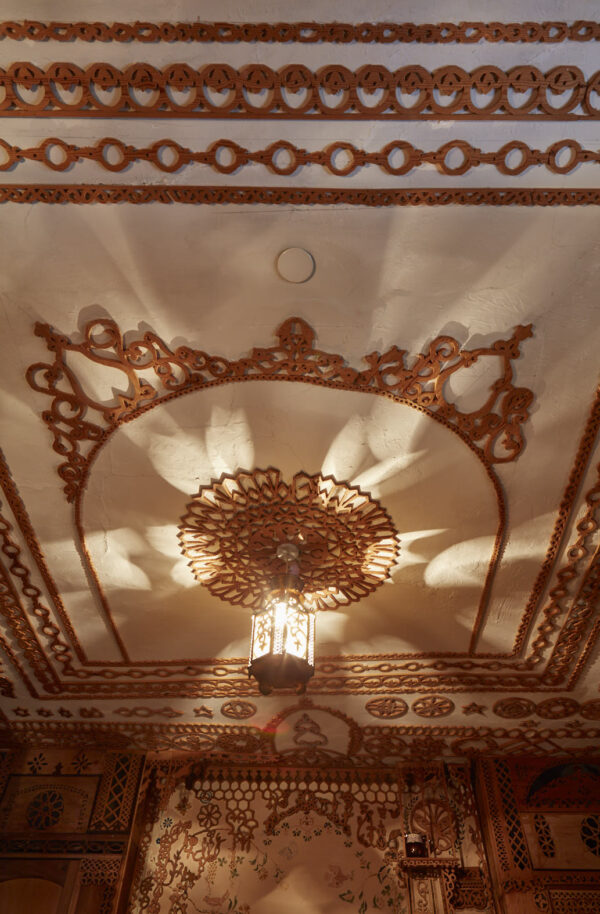 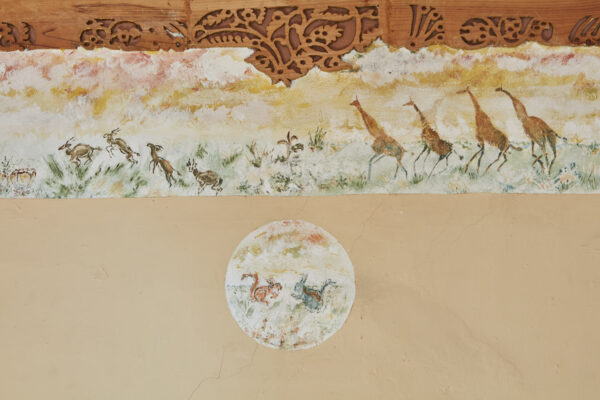 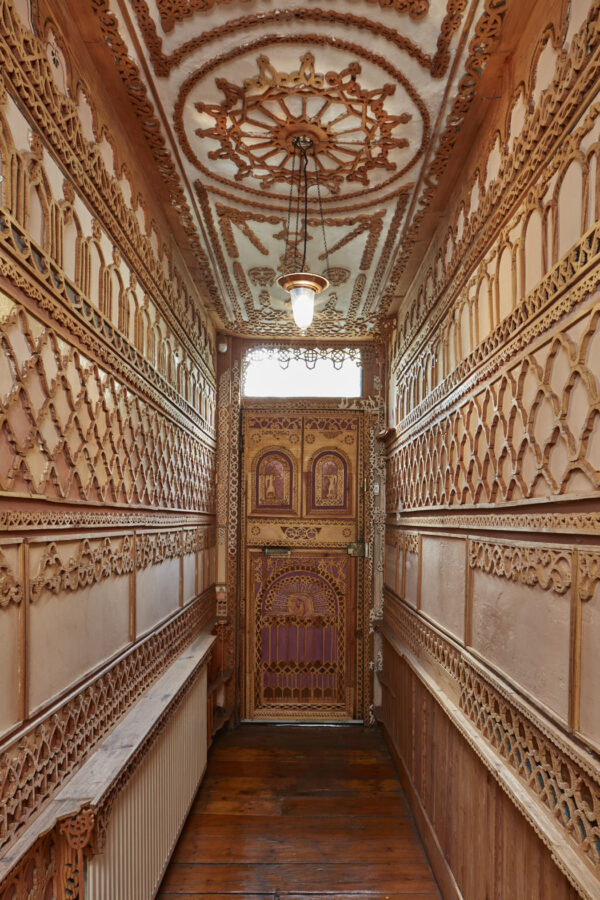 575 Wandsworth Road is a modest terraced house owned by Kenyan-born poet, novelist and British civil servant, Khadambi Asalache, between 1981 and 2006.

Prompted by a persistent damp patch in the basement, Mr Asalache found a creative solution to this practical problem: initially disguising the damp using pine floorboards that he salvaged from skips in the local area, and then embellishing with hand carved wooden decoration until nearly every wall, ceiling and door in his home was covered. He also hand painted the floors and carefully positioned his vast collection of glassware, lustreware and other ceramics to catch the light and cast dramatic shadows across the rooms.

Mr Asalache studied architecture as a young man at the University of Nairobi before winning a prize to study in Rome. From there, he went on to study fine art in Geneva and then Vienna, before coming to England to pursue a literary career in the 1960s. He published a novel 'A Calabash of Life' and a selection of poetry called 'Sunset in Naivasha. He is seen as a pioneer in Kenyan literature. He also studied the Philosophy of Mathematics part-time at Birkbeck College, which may have influenced his designs for his house with the belief that there is no true symmetry in nature, but there is a harmony and balance.

He took inspiration from all over the globe, but specific influences include the coral houses on the island of Lamu off the Kenyan coast, the yali houses that line the Bosporus in Istanbul, and also places like the Great Mosque at Cordoba and the Alhambra Palace in Spain. Over the course of twenty years, he turned his home into a work of art, and in 2006 Mr Asalache passed away, leaving his home and all its contents to the conservation charity, the National Trust. With its core purpose to look after special places for everyone forever, 575 Wandsworth Road is now cared for and opened up by a small but dedicated team of staff and volunteers. Due the scale and fragility of the interiors, physcial access is limited to just 2000 people per year, but inspired by the Mr Asalache's creative spirit, the team are exploring creative ways to be open up access and unlock the potential of the house to unlock potential in others.

Due to the impact of Covid-19 and restrictions with social distancing, 575 Wandsworth Road is not currently open but there is the opportunity to experience the space virtually through live-streamed tours. The team are also very interested in building local partnerships with like-minded organisations/individuals to find more ways that this modern piece of local heritage and culture can support the lives of local people across Wandsworth and Lambeth.

It has a strong community of cultural organisations/individuals who are passionate about the positive impact of arts and culture on the lives of people.