This new ten year strategy is about more than just working with cultural organisations – it’s about supporting individuals who have made their home in the Borough. Empowering and enabling creative individuals to create a strong cultural network that is welcoming to all and encourages innovation.

In addition, in January 2020, Wandsworth Council adopted its new Resident Participation and Engagement Strategy following extensive consultation with residents in Council owned properties. This outlined that “the Council is committed to ensuring that residents living in its properties benefit from a wide range of activities and cultural programmes taking place across Wandsworth,” and to working with voluntary, community and cultural organisations to support events taking place within estates and adjoining green spaces.

In December 2017 Work and Play Scrapstore was awarded £4,000 (out of a total cost of £8,270) through the Wandsworth Grant Fund to work with three community artists, Jayson Singh, Stevie King and Airborne Mark, to develop large-scale, highly visually impactful, semi-permanent/permanent pieces of artwork on Hazelhurst Estate to augment the environment and surroundings.

Working closely with the Council’s Estate Management, the artists’ brief was to deliver artwork in the area adjacent to the tower blocks, Hayesend House and Chillingford House, which were brightly coloured, joyful and celebratory in their nature – all with the themes of reuse, sustainability and the environment interwoven. Throughout the project, there was a strong focus on providing numerous opportunities for the local community to input their own artwork to the projects through collaborative making and design sessions run out of the Scrapstore. These sessions involved local community groups and the local schools as well as 35 Scrapstore volunteers and 400+ members.

Over the project, 525 Wandsworth residents engaged in the initiative through the various workshops and the installation period. The project resulted in four linked, but individually separate, pieces of bespoke artwork: two community pieces of artwork and two commissions that involved the community with observation and inclusion opportunities.

The two community pieces were: ‘Lilies Speak Volumes,’ over 100 separate murals painted on the pillars of the tower block by individuals living all over Hazelhurst Estate, many of them young people. Some Work and Play Scrapstore volunteers and members also took part; and ‘Upcycled Mosaic,’ which saw 50 people make upcycled wooden paintings at Hazelfest #2 to add to the giant Hs, 20 Scrapstore volunteers work on the giant Z and T plastic collages, and 25 children from Smallwood Primary School make upcycled mosaics for the giant U and E.

The two commissioned pieces were ‘Waterlily Eye,’ the artwork on the bridge above the pillars, and ‘Chameleon Mural,’ which many local, young residents enjoyed watching take shape. Ten people participated in the ‘burning the origami’ ceremony at the end of the project and Airborne Mark undertook a free extra project for the Work and Play Scrapstore to decorate their front doors.

A key part of the project’s ethos was creating something environmentally friendly. 100% of the upcycled mosaic was made with reused materials, thus reducing carbon emissions through preventing these materials going to landfill/incineration. However, it was not practical to reuse paints for the painted murals as they needed to be anti-graffiti and fire-retardant masonry paint.

The project has had a very positive impact on the estate, with residents reporting how they feel more pride in their local area; littering levels have been significantly reduced. In May 2019, Work and Play Scrapstore secured funding from the Wimbledon Foundation Community Fund to complete an additional mural on the other side of the walkway above their entrance. 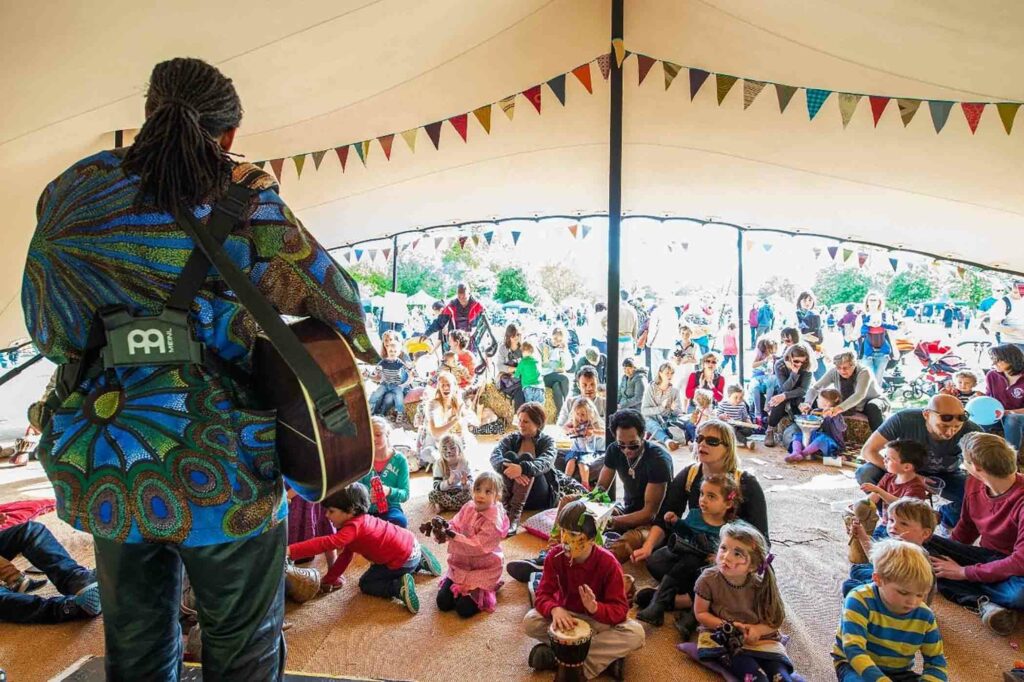 Wandsworth Arts Fringe (WAF) is the Borough’s largest annual, two-week arts and culture festival. During May, multiple venues across the Borough open up to 150 events, performances and workshops with many hosted in local ‘hub’ venues throughout the Borough. In 2019 almost 25,000 people engaged with local events and 4,199 local residents of all ages either helped to create content or performed as part of the festival.

WAF is an opportunity for cultural organisations, community groups, youth clubs and educational institutions to throw open their doors and showcase their amazing work. It is also a means to fund a local programme and support creative employment in a variety of roles: we offer opportunities to get involved with anything to do with festival production – from production managers to lighting designers, print designers, writers and directors to people who run workshops. In addition to WAF grants, we run training and networking sessions for potential participants, helping to develop new skills, broker new partnerships and share methods of best practice. Our ultimate aim is to help people develop their craft and create a cultural ecology for everyone.

Whilst the sixteen days of the live festival programme are crammed with events and shows open to the public, there are many activities and events going on before and afterward the fringe. In 2019, we ran 191 outreach and engagement sessions as part of WAF over eight months to draw in participation from local schools, youth groups, community centres, refugee groups and many more.

WAF creates a happening that ultimately changes the cultural landscape of Wandsworth. The festival is a wonderful celebration of what makes Wandsworth unique, but its vibrancy throughout the year is what confirms its lasting impact and legacy.

“This is a wonderful initiative from Wandsworth Council in partnership with Enable Leisure & Culture with support from
Arts Council England. As it’s now been running for 10 years, they must be doing something right and it’s an example of how the arts can bring communities together – something other Borough Councils would do well to take note of.”

My name, The Storyteller of Southfields, reflects what I like to do: bring stories and storytelling to the local community. Storytelling evenings and events are an opportunity for people to meet up, escape into stories, have a chat, and sometimes share their own experiences. My show ‘Life Death and Dreams Along the Way’ was inspired by both my mum and dad’s battles with terminal cancer.

I was lucky to join other storytellers, including Alison Royce, at a Wandsworth Arts Fringe event she organised on Tooting Common a few years ago.

Since then, we have continued to work together and create a wonderful local peer network. I’ve also joined local artists as part of Wandsworth Artists’ Open House. Visitors often stay for a cuppa, a slice of cake and a chat during the day, whilst during the evening we escape into stories surrounded by the artists’ work.

WAF in your Living Room 2019 helped me conquer my fear of Zoom and produce Two Tales, where some of my favourite characters were faced with Covid-19 and lockdown: Rapunzel rebelled and Little Red Riding Hood grew up, but not before we found the usual wolf and Prince. My storytelling has really evolved during Lockdown, in future I’ll be working with live and virtual audiences.

In May 2017, local resident Natasha Sackey was able to realise a long-held ambition of introducing carnival arts to the residents of the Latchmere ward. As a creative producer and registered dance movement psychotherapist, Natasha had long been an evangelist for the creative and therapeutic benefits of dance, and she was keen to share this passion with her neighbours. Through coming along to WAF networking meetings and enthusing others with her ambitions to a develop a local carnival, she was able to build a range of connections that came together to pilot the first Flagz Mas band carnival day event in the Winstanley and York Road community.

Natasha worked closley with the York Garden library who’s support enabled the event to take place. It had a turnout of around 450 attendees. Natasha had judged her neighbours’ enthusiasm for a carnival correctly: during and after the event enquiries came in from families and other youth organisations about how they could be part of future programmes. In response Natasha and Flagz Mas band developed a three-part programme for 2018, including:

Project: An introduction project to Carnival Arts, consisting of an outreach programme working with 40 young people from Providence House and Caius House, which then continued once a week over April and May to develop performances and costumes for Flagz Carnival

Phase 2: Flagz Carnival day as part of WAF. This aimed at bringing the whole community together to celebrate carnival arts, including performances, stalls and community engagement activities.

The second year was even more successful, with over 650 people engaging with the carnival over the day, the majority of whom had been able to walk to the event. Enthusiasm from young people was evident, with both youth clubs and families coming up during the event to ask how their children could be involved with the Flagz Mas band in the future.